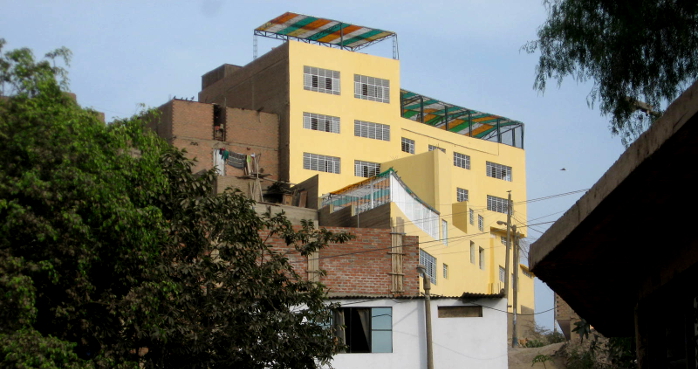 The voices of the children playing can be heard from afar, which is the first indication of who makes use of the large building on top of the hill. As the steep, dusty hillside rises, you can better appreciate the sound of musical instruments, the tones of happy laughter, and the shouting of children rushing to the house, where a warm welcome awaits them all.

The history of St. Bernadette’s Children’s Centre began in the year 1995 as a response to the poverty and insecurity in which children lived in the area of Cornhill and its environs. With support from the parish of St. Bernadette´s in Ireland, in August 1996, a two-story house on top of a hillside was bought and renovated in order to offer the local children a safe place to play and develop. On February 15, 1997 the Children’s Centre was opened to the delight of the surrounding communities.

In the first three years the Centre opened for children between the ages of 3 to12 in the afternoons, but the number of participating increased from 70 initially to 250-300 daily, which made it difficult to accommodate all. Due to this need to expand it was decided to buy the adjacent house, and along with using the fall-off of the hillside, the ensuing extensions tripled the size of the original Centre, allowing us to include more activities and opening a special area solely for the Psychological and “Child Defense” services.

In the year 2000 we started to open in the mornings in order to receive teenagers, many of whom were the original children attending in the afternoons, and which saw the participation of the children and teenagers rising to an average of around 500 daily. In the year 2001 we started to organize assemblies for the children and teenagers in order to better to listen to their ideas so that they could become protagonists in the implementation of programs. Later, with the support of the Irish Government, a carpentry cum drawing/painting workshop was built, along with a kitchen, and bathrooms with showers for the staff. At the same time the construction of a reading room annexed to the library was opened to promote the habit of reading.

In San Martín de Porres, Lima, there are more than 70.000 people living in poverty (INEI 2012), a figure that has increased in the last few years, making it a hard struggle for an increasing number of people to earn a living. In such a situation the most vulnerable group is the 35% that represents children (UNICEF-2011), whose development and security is threatened in many ways.

We see children abandoned by parents who work all day, which forces the children to take on adult domestic tasks and, in the worst case scenarios, to work in the street in order to contribute to the family income (selling sweets, cleaning cars, etc.). These activities expose the children to a series of physical and psychological dangers, while denying them the possibility of simply enjoying their childhood through play, and putting at risk their education and health.