St. Bernadette’s Civil Association has an obligation to respect the fundamental rights of children and vulnerable adults and is therefore committed to their protection from sexual and other forms of abuse, respecting their inherent right to dignity of life and bodily integrity.
This operational policy is designed to ensure that the Association of St. Bernadette’s takes all possible measures to prevent such abuse and to respond appropriately and timely to all allegations made against its members or associate members.

President of the Association:

• to implement and act in accordance with the Association’s Policy for the Protection of Minors and Vulnerable Adults.
• to appoint a Delegate and a deputy Delegate. The latter would have the same functions as a Delegate but would act in their absence.
• to appoint a Support Person to be available to those who allege they have suffered abuse and to their families.
• to appoint an Adviser to be available to the accused.
• to appoint an Advisory Panel comprising a child care professional.
• to ensure that a suitably trained and competent person is available to deal with all communications with the media, recognizing the right to privacy of the victim and the protection of the rights of the accused to a fair trial.

• to undergo relevant training to ensure an understanding of sexual abuse and its impact on victims as well as the implications of an allegation for the accused.
• to implement and oversee the Association’s Policy for the Protection of Minors and Vulnerable Adults.
• to be familiar with the working arrangements of the local civil authorities in the investigation of complaints of child sexual abuse and to make themselves known to those personnel who have responsibility for dealing with such allegations.
• to receive and process all allegations of abuse in accordance with the Associations Policy.
• to ensure that every allegation is accurately recorded and carefully examined.
• to promote awareness and understanding of sexual abuse of minors and vulnerable adults in the Centres.

• to undergo relevant training.
• to be available to those who allege that they have suffered abuse and to their families.
• to assist those who wish to make a complaint of abuse and assist them in accessing information and advice.
• to be aware of the difficulties involved in reporting cases of abuse and the desire of the person to protect their privacy, especially where family members may be unaware of the abuse.
• to assess and respond to the needs of the complainant and their family.
• to be available to the complainant and their families throughout any investigation that might ensue.
• to represent the concerns of the complainant on an ongoing basis and to keep them informed of developments in regard to the allegation.

• to be comprised of the members of the Board of Directors of the Association, a child care professional, and a psychologist.
• to offer advice on a confidential basis and according to their respective areas of expertise.

Procedure for Reporting an Allegation:

• A person making a complaint should contact the Delegate of the Association.
• The Delegate or deputy should be available to receive information about complaints without delay.

2. When an allegation is made to a member of staff other than the Delegate:
Where the complainant is an adult:

Where the complainant is a child:
• listen carefully to the child without asking leading questions.
• check that what has been heard and understood accords with what the child has actually said.
• reassure the child making no promises that cannot be kept.
• make a careful written record of the allegation.
• inform the Coordinator as soon as possible, who will then inform the Delegate.

Examination of the Allegation:

Where a police investigation is already underway:

If the Delegate learns indirectly of a complaint of child sexual abuse because a police investigation is already underway, the Delegate. should endeavor to ascertain what is known of the accusation.

• A detailed written record of all interviews and action taken must be kept.
• All records must be kept in a secure place.
• Records shall be held permanently.

I. Procedure:
1. The Delegate shall:

2. The President of the Association shall:

• inform the accused that an allegation has been made and is being dealt with according to the policy.
• request that the accused meet with the Delegate.
• explain the role and availability of the Adviser.
• advise the accused that s/he is suspended temporarily until there is a decision form the Advisory Board.

4. Initial Interview of the Delegate with the complainant:

5. Initial Interview of the Delegate with the accused:

• the Adviser should be present at this and all subsequent meetings.
• ensure that the accused understands.
~ that they are not obliged in law to respond or to furnish evidence.
~ that they are entitled to civil representation.
• should the accused wish to speak freely about the allegation, the Delegate should record what the accused has said in response to the allegation. This should be checked with the accused for accuracy.
• where the accused expresses the wish to consult with civil advisers before responding, arrangements should be made for a further meeting at which those advisers would be welcome to attend.

6. Report of the Delegate to the President of the Association

• the Delegate should present a report to the President of the Association and the Advisory Board as soon as possible including all details of the allegation and the response of the accused.
• in those cases where a police investigation is already underway, completion of a report may need to be delayed.

7. Action by the President of the Association.

~ the allegation itself.
~ the report of the Delegate.
~ any representations by the Support Person or the Adviser on behalf of the complainant or the accused
~ the appropriateness of the accused continuing in their present assignment (leave of absence should not be construed as an admission of guilt).
~ whether a specialist professional evaluation of the accused be sought at this stage
~ the appropriateness and the timing of any public statement.

• if the President of the Association is satisfied that abuse has or may have occurred immediate steps must be taken to remove the accused from the workplace and the appropriate civil authorities informed.

II. Restoring the Reputation of a Person Wrongly Accused:

• natural and civil justice demand that an accused person be presumed innocent unless the contrary has been established and where an allegation is not subsequently substantiated a grave injustice will have been caused to the accused.

• should the civil authorities decide not to prosecute and the President of the Association is satisfied after consideration of all the facts that the person has been wrongly accused appropriate steps should be taken to:

~ restore the good name of the person concerned.
~ to repair such harm or scandal as has been caused.
• where an allegation has been withdrawn similar steps should be taken. 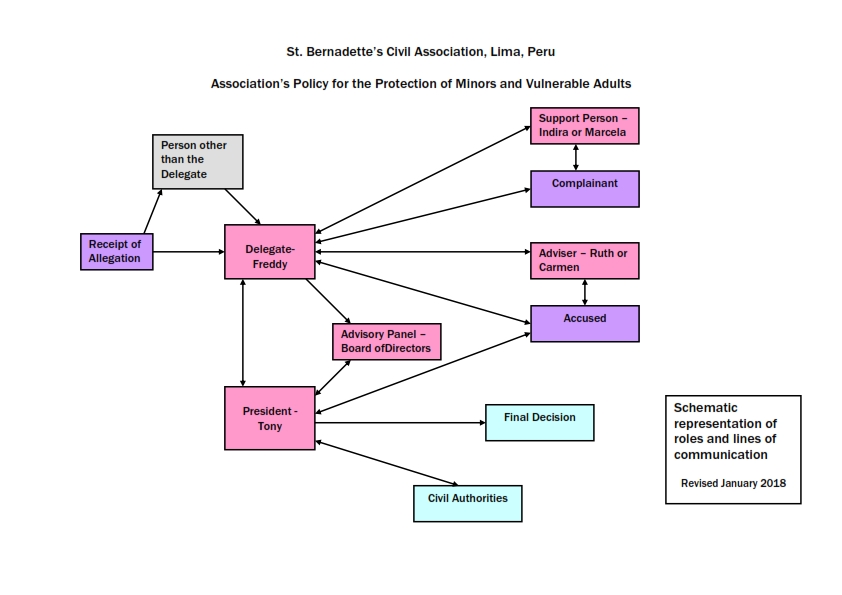